I ran my first race 50 years ago this week.  It was the Wamego Cross Country Invitational.  At the time it was the biggest meet in the state of Kansas due largely to the fact that the state meet was run on the golf course there.

I wasn't good enough to play basketball.  I knew I wanted nothing to do with the contact offered up by football.  That left me thinking that maybe I could be like Jim Ryun.

I  spent the summer of 1970 learning how to become a runner.  That was thanks in large part to my neighbor Greg Morgenson.  Even though Greg was going to be a junior at Abilene High School, he allowed this mere freshman to join him on our near daily runs.

Looking back now our training was laughable but it was something.  We would run a mile out, take a short rest and then head back.  I think we stretched it out to four miles once or twice but generally it was just a couple of miles.  Every couple of weeks we would run one mile time trial up and down the block.

During that summer Greg got a copy of The Long Green Line from the high school cross country coach, Robert Chatham.  I devoured the book.  I began to realize that cross country could be fun even though it would require a lot of work.

The summer of training put me into a good position heading into the start of team training.  I remember a few workouts from my short six weeks with the team.  Chatham loved one workout in particular.  It was called easy/hard.  We would run 20 220's on the golf course.  We would go down in :45 and rest :45 seconds and then try and run under :35 with another :45 second rest.  About halfway through the workout we would start doing everything we could to prolong the recovery.

The other thing I remember about doing interval training on the golf course was I would take water breaks which were strictly frowned upon by coach.  It was unheard of back then to take water during a workout because it was believed it would cause cramping.

By the time we ran our two mile time trial I was in a position to make varsity which made at least one upper class man angry.  He was asked to leave the team.  I managed to finish seventh in just under 12 minutes on a fairly hilly course.  The question is whether Coach Chatham would dare run a freshman at the first meet of the season on a team that was considered one of the best in the state.

I think Chatham realized that other than the top five on the team, I was the only other athlete who had spent the summer training.  I suspect that's why I was allowed to run varsity, which meant the world to me at the first meet of the season.

It was a very emotional time in my life.  My mother had revealed to me just before the start of school that she planned to move the family back to Lawrence.  She was divorcing my stepfather.  I was all for the move.  I was growing tired living in a small town where everybody knew everybody else's business.

The fact that I was showing success in athletics had given me pause to wonder if I shouldn't stay behind for the first semester so I could finish out the cross country season.  I could stay with my grandmother and continue running for Abilene.  I know by the time I reached my decision my coach and teammates were hoping I would stay, but in the end I wanted to stick with my mom.

So here I was heading on the bus to Wamego on a wet, miserable, late summer day.  We arrived at the golf course where the meet was run to find out it was a no go.  The golfers didn't want us to spoil their pristine grass and we were directed to the site of an abandoned nuclear silo on the other side of the highway from the country club.

We were out on a massive pasture that was a rain soaked mud bog that had cattle roaming on it.  I tried to do a short warm up and completely trashed my shoes with mud.  I was grateful that I had brought my spikes with me and not knowing any better decided to race in them.

I remember seeing the Lawrence High team there because my old childhood friend Kirk Duncan was running for the Lions.  I remember not being sure what to make of the mass of humanity gathered on the pasture.  There were at least 30 teams on hand to run the two races, divided up into large school and small school divisions.  We were a small school.

The start of the race was a massive mud slog.  I remember spitting on a kid as we charged across the first quarter mile.  Some kids lost their shoes in the muck. I remember hitting the mile mark and feeling like I wanted to die.  Most of all I remember the last 300 yards where I caught one of my teammates and passed several runners with my sprint to the finish.  I was 38th overall out of 100 plus runners.  I was the top freshman in the race.  We finished 3rd as a team and I believe our top varsity runner Dennis Cole had come in third.  Greg was somewhere in the top ten as well.

As soon as the race was over the day turned sunny and pleasant.  I remember the team stopped in Junction City on the way home and we enjoyed lunch at McDonald's.  It was a rare treat back in the day.

Our next meet was supposed to be on Tuesday, a dual affair with Salina Sacred Heart.  I knew it would be my last with the team as I had decided to leave the following weekend for Lawrence.  That Tuesday was cold with freezing rain.  Yes, it was still September but that's the way weather was back then.  The meet was canceled and my running career as an Abilene Cowboy was over. 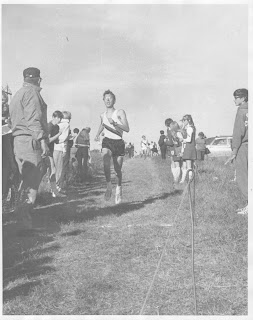 I moved to Lawrence.  I was thrust back into junior high where there was no cross country.  I tried to go workout with the Lawrence High team but I felt unwelcome and the way the school was scheduled I would always be 15 minutes late for practice.  I knew I wouldn't be eligible to run but I wanted to keep training.

Somehow I got to know enough Lawrence High runners that I managed to snag a ride with a few of them to the state meet in Wamego.  Lawrence High got stomped but Abilene lived up to its potential and finished third in its division.  I had earned a varsity letter by running the one race for Abilene but Coach Chatham wasn't happy with my decision to leave the team.  So I was denied the letter.  I felt bad about it but I understood his reasoning.

Greg and I remained friends.  In fact, the following year he was the one who had to leave Abilene with his family for a move to Lincoln, Nebraska where he would become a state champion in the mile.  Greg and I would run one last cross country meet together in Kansas City before he left for Nebraska at Swope Park.  I got smoked but managed a top 30 finish.  Greg was somewhere in the top ten.  Not a bad finish for a small town runner against the big city boys.

So I have been a competitive runner for 50 years.  During that time I learned that I didn't want to train hard enough to be another Jim Ryun.  But I also learned that I loved running just enough to always stick with it, through tough times, tough jobs and a lot of tough travel around this wonderful country.  It's allowed me to meet and get to know my heroes.  It's given me more than I've ever deserved.

Posted by Rink's Ramblings at 7:44 PM