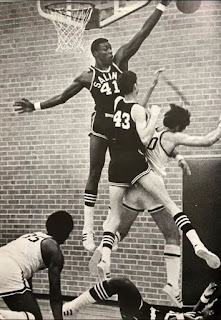 I remember the first time I saw a jaw dropping athlete.  It was at the Kansas State High School Basketball 4A Tournament in the winter of 1972 at Allen Field House.  I went to an opening round game featuring McPherson against Salina Central.  I went to see a player named Nino Samuels.

What I saw that night left me amazed.  Nino Samuels was a man playing among boys.  He overpowered the McPherson squad with slashing drives and rebound after rebound.  But McPherson had a better team and squeezed out a win on its way to a state title.

I was excited because the Salina Central All-American who averaged 31.1 points and a staggering 19.3 rebounds a game his senior year, was going to the University of Kansas.  He was a sure fire NBA prospect.  Back in the fall of 1972 freshman were not allowed to play varsity basketball.  That left Samuels to sharpen his skills on the freshman squad.

Suddenly, the NCAA decided to change its rules regarding freshman eligibility half way through Samuels freshman year.  The 72-73 Jayhawk squad was just this side of bad.  I had hoped that Nino's arrival to the varsity would lift K.U.'s hoop fortunes.  There was one problem.  Nino couldn't shoot.  I see it as a failure of the Kansas coaching staff.  They should have drilled him and drilled him on shooting the 15 footer.

You could see that by the start of his sophomore year, this heralded player was disheartened.  His minutes were few on a Kansas team that would eventually would go to the Final 4. Averaging 4.4 points per game, Nino quit the team around Christmas and headed back to Salina and Marymount University.

I remember hearing stories from an English professor at K.U. who described Nino as a good kid but a lackluster student.  He told me about an essay Nino had written about the NBA which Samuels had summarized as, jock around for three quarters then hustle.  That story always stuck with me.

Samuels thrived at Marymount, a NAIA power.  By his senior year Nino had led his hometown team to a third place finish in the national tournament.  He never played a minute in the NBA.

Nino Samuels passed away Wednesday.  He was only 67.  Nino Samuels is still one of the three best high school basketball players I ever saw in person.  Darnell Valentine of Wichita Heights and Cole Anthony who now plays at North Carolina are the other two.  He may very well be the best all around high school athlete I ever saw.