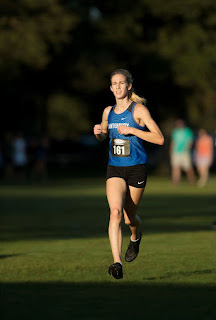 This Saturday marks the beginning of the Florida high school cross country season.  It's a head scratcher.  There's little question as to the identity of the tip top girl in Southwest Florida.  Cantebury junior Jessica Edwards is by far and away the best distance runner in the area, boy or girl.

Questions surround the identity of the boy that will fill the rather large shoes vacated by Estero's Hugh Brittenham, now at Florida, beginning what one hopes will be an epic collegiate career.  Right now only two names pop into my head as to Hugh's heir apparent.  One would be Brittenham's Estero teammate, sophomore Kolton Pickard, the other is Fort Myers junior Liam Holston.

Something tells me another boy will pop up out of nowhere to take some races.  Brady Gibson, a senior from Naples, is a top notch talent and Estero junior Colton Tucker could rebound from a somewhat lackluster track season.  Besides the aforementioned Pickard among the young guns is Fort Myers sophomore Colson Palmer and Cantebury freshman Charlie Meagher.

Finding a state medalist among any of the half dozen or so boys that will dominate the Southwest Florida racing scene is another question.  Pickard and Holston could sneak into the top 20 at the Class 3A race.  Meagher may have the best chances because he will be racing the lesser depths of Class 1A.

Edwards should dominate the girl's side.  She will try to show that a top middle distance talent can shine at 5,000 meters.  I believe she has the strength and speed to capture the Class 1A state title.  Naples has a trio of outstanding cross country runners returning, Zoe Dantonio, Jillian Dempsey and Morgan Vickaryous.  Fort Myers returns a state medalist in senior Stephanie Ormsby.  It wouldn't surprise me if Estero senior Mia Perez brings the heat this season as well.

When it comes to singling out the top teams, it will be a story of the usual suspects.  Fort Myers, Estero and Naples should produce squads good enough to make it to State on both the boys and girls side.  The big question surrounds the Naples High School girls team.  Naples appears to be a lock to finish in the top five.  In Florida, only two teams take home trophies at State.  The Golden Eagles need to lop off another 30 seconds per girl to have a shot at taking home the hardware.  With the depth of returning runners Naples could make it happen.

Posted by Rink's Ramblings at 1:28 PM