The ghosts of 1988 will always stay with me.  The death of two friends and the slow deterioration of my work and personal life.  1989 started off with promise.  I was working on putting my head on straight.  I was training smart and racing smarter.

By the spring of 1989 I was back in a bad place.  It would take a lot of work with setbacks before I began to feel my way through my misery.  I found solace in running.  I found hope in friends like Craig Davidson, a Phoenix running  legend, who worked hard at putting good thoughts in my head.

Craig loves running marathons.  By now he's topped 250 and still going.  He wanted me to join him in October 1989 at a marathon that he was particularly found of in St. George, Utah.  I had basically done zero training from May until August.  My tip-top condition in the early winter was going to have to help me get through the rigors of a marathon.  Plus, I had never run two marathons in a calendar year.

I remember piling into a van with Craig and three of our other Saturday training partners. It was a monotonous drive through the desert and I wondered what I had gotten myself into.  We were going to drive straight to St. George and spend the night.  We'd get up at 4:30 a.m. to pile onto buses that would take us up to the start of the race. 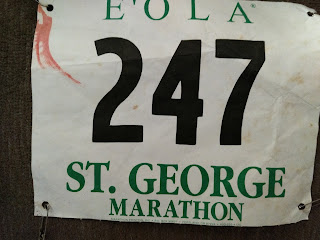 Craig had told me it was a downhill race.  I had no idea just how downhill.  In the darkness I had no sense of the terrain.  We drove for about 45 minutes and were dumped out in the middle of nowhere.  There were about three thousand other runners freezing their asses off in the desert.  It was pitch black with a few barrels burning with fire to offer scant warmth to our frozen bodies.

Still dark, the gun went off and off I went with Craig.  In the darkness he quickly disappeared.  I hit the first mile in 6:25.  The sky was beginning to brighten about ten minutes into the race and I could see the beautiful desert landscape and realized we were on our way to a gentle descent to mile seven.

I was running easily at 6:20 pace until the massive volcanic hill that greets runners for a one mile slog uphill to mile eight. I was well over seven minutes for it.  I was hurting and beginning to doubt that I would run 2:55 and possibly not even break three hours.

Then the urge to go hit me.  A porta-potty saved the day at mile 10 and I spent one minute expelling what I had consumed the night before.  Despite the rolling hills up to the half marathon spot I was still moving fairly well hitting the half in 1:25:12.  I was thinking it's not if, but when will the wheels fall off.

The sub 6:20 pace continued as I gloried in the gorgeous scenery of the red rock canyon we were running through.  Even as I enjoyed the landscape I had enough in me to punch mile 21, the start of the last big downhill in 5:53.

I suddenly stumbled upon an old Kansas City training partner Gary Hansen who had broken 2:39.  Gary and I were about the same ability.  It dawned on me that if I did some serious training I could break 2:40.

It was an eye opening experience.  I knew with a reasonable amount of training I too could break 2:40.  The seed was planted and St. George was going onto my 1991 race calendar.

Posted by Rink's Ramblings at 9:00 PM