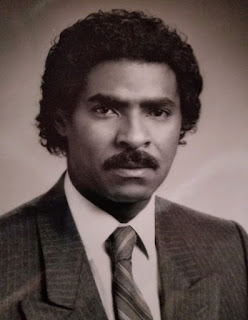 Tim Richardson was a local television news star.  At least that's the way I thought of him as a teenager growing up in Lawrence, Kansas watching Kansas City television.  Tim worked at KMBC.  He was a consumer reporter who helped people.  The charisma just oozed off the screen.

So I was awestruck when I first met Tim.  I was working at KMBC as an intern in the spring of 1978.  By this time Tim had left television news and if my memory serves me correctly he was working for the city of Kansas City, Kansas at the time.

I didn't have strong feelings about many of the on-air people at the start my career.  Tim was out of the business but he had left his mark on this impressionable young journalist.  I felt the same way about Charles Gray, who had migrated to radio by the time I started at Channel 9.  And I eventually felt that way about his replacement at KMBC, the larger than life Larry Moore.

I learned tonight that Tim Richardson had died.  The news left me crushed.  I don't know why.  Losing people who had an impact on your life is part of living life.  But Tim left a deep impression on me.

It's probably because I got to know Tim when he returned to television at WDAF TV.  I soon found out that Tim like most heroes, had his weaknesses.  But he was a special man, with incredible ties to the community at large.

I always felt that Tim was looking out for me.  He would even fetch me a meal from Gates BBQ and makes sure my beef sandwich was lean.  I think we had a bond because I gave him respect that few of the other producers at the station gave him.

Tim could be slippery and could be prone to not pushing to do his best work.  That angered the other producers.  I was tolerant of his unusual work habits because I knew that when I needed him, when it was important, Tim Richardson would come through for me.  He would get the story.

Tim was a dapper, hip man of the town. One day I came to work one day in a pink dress shirt.  He quizzed me about whether wearing pink would in some way mask my masculinity.  I assured him that it didn't and it wasn't before too long that Tim had purchased a pink dress shirt.

I remember when Tim had learned that Kansas City Chiefs great Buck Buchanan was dying from lung cancer.  Tim and talked about whether we should break the news.  Tim spoke with the Buchanan family who pleaded with us to wait, that when the time was right they would give us the scoop.  Tim trusted me with the information knowing I wouldn't share it until the time was right.

It wasn't a month or so later that the Kansas City Star broke the Buchanan news and we were beaten out of a big story.  Tim showed me something in that moment.  He wasn't angry.  It was just part of the job and that you just had to push forward and do the best with the hand you were dealt.

Tim wasn't the best reporter I worked with and he certainly had his faults.  But I always enjoyed working with him.  I savored his company whether it was a beer after work or a quick lunch together at Gates.  I wish I could be with him one last time for a beef and a half with fries.