I've had the good fortune to have run, coached and written about high school cross country.  Back in the stone age when I competed we raced over two mile courses.  The weather in Kansas when racing started, usually the first weekend in September could be unpredictable.  It was generally cool and rarely was it hot.  Once the state championship was held, your season was over 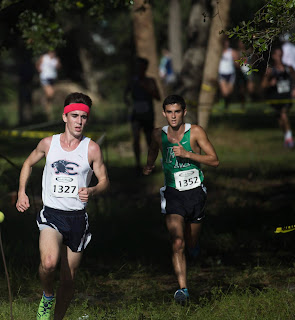 A lot has changed in the last 45 plus years.  The vast majority of races are competed over 5,000 meters.  It's stinking hot in Kansas in September and brutally hot and humid in Florida where I live now.  And the season seems to have moved up a week or two in some instances making it even more likely that the weather is going to be brutal.  And the number of post season races after state have multiplied considerably.

I have a lot of thoughts about this that would make for better racing and better conditioned athletes.  It boils down to two simple approaches; shorten the season and thus limit the number of races.  Starting the cross country season at the end of September would certainly make for more favorable weather for racing, especially in states like Florida in the Southeast and across the South and Southwest.  It would also make for runners who are actually in shape for racing.  Let me explain.

A handful of committed high school coaches work with their athletes over the course of the summer.  Many even take their kids away to camps just before the start of school.  This does not happen at the vast majority of schools.  The kids are on their own and "training" for most of these runners doesn't start until usually a week before the start of school.  Many athletes compete in their first race of the season with two or three weeks of training under their belts.

The number of races is a big issue.  Smart coaches hold out their top athletes out of two or more meets over the course of the season that can feature as many as eight or nine meets before qualifying begins for a chance to run at the state championships.  Plus, there is a big difference between running two miles over 5,000 meters.  Don't kid yourself, a 5K puts considerably more wear and tear on the body especially in the hot months of August and September.

Most kids race every weekend from the last weekend of August until the end of October or the first weekend of November.  Some athletes race as many as 12 times leading up the the state championships.  That's a lot of 5K's.  Then if you go to Footlocker or the Nike post season meet, the number goes up from there.  I really think less is more when it comes to distance running.  These young athletes don't need to run more than six or seven regular season meets.

If you question my thinking then look at the collegiate system.  Yes, the athletes there are competing at longer distances.  But most schools race their top runners no more than six or seven times over the entire three months of their season.  That includes the NCAA Championship if you make it that far.  And we are talking about older athletes who are certainly in better shape.

I honestly believe less is more when it comes to racing, even for younger athletes.  Far too many high school coaches actually know how to properly condition their runners that giving these teenagers a chance to get at least a month of running under their belt before racing would make for a more positive experience.  I've grown weary of watching heat exhausted kids fall across the finish line at far too many races.  It's time for a change.