Training: The Summer of 70

I wanted to write about training and five different periods of my life when it was a joy to get out and run on a near daily basis.  Training can become a grind.  Burnout is always lurking around the corner.  The one constant, the one binding part of my favorite times to run, was the assortment of good company I've enjoyed out on the roads and even on the track.  Some of this is old ground covered in previous blogs.  But I think it's important to remind myself about why I run and the joy I find in it.

It all started when I decided that I could be like Jim Ryun.  I was too skinny for football, simply not athletic enough for basketball, but stubborn enough to embrace the pain that comes with long distance running.  Unfortunately 8th grade junior high track in small town Kansas in 1970 didn't offer anything longer than 440 yards for a Jim Ryun wanna-be.  The closest I could come to sniffing a shot at running in an actual track meet was a 3rd place finish in a 440 yard time trial where the first two runners would get to run for the team.

Fortunately I had a neighbor who was running track and cross country for the Abilene Cowboys.  I gravitated to Greg Morgenson like a mouth to an open flame.  He was 2 years older than me and drove a beautiful old early 50's Ford pickup truck.

Greg was planning on running his way through the summer and he allowed me to tag along as company on the surprisingly short training runs.  That summer Greg and I ran together five days a week.  It was generally the same 2 mile out and back course.  Believe it not we would stop after a mile for a quick break. 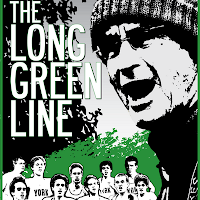 By the end of the summer I think we may have covered as far as 5 miles in a single run but it's probably just my imagination.  Greg indoctrinated me in all things distance running.  He had me read a book given to him by our high school cross country coach, Robert Chatham.  It was called "The Long Green Line."  It was written by the now legendary Joe Newton who still coaches at York High School outside of Chicago.

Looking back I realize I missed the overriding message that Newton, Greg and Coach Chatham talked about when it came to cross country.  Cross country is a team sport.  It's one of the great pains of my life that this lesson didn't sink into my head until I was an adult.

But back to the running.  What a summer I had.  Every other week Greg and I would test ourselves against the watch running close to what we thought was a mile.  I tried mightily to break 6 minutes, Greg focused on getting under 5.  Greg gave endless encouragement.  He even suggested that the hard work might pay off with a spot on the varsity.  I probably logged all of 120 to 150 miles that summer.  The miles, as few as it seems now, held me in good stead when practice start in mid-August.

I made the varsity on a team that would go on to finish 3rd in at the state cross country championships.  Unfortunately I wasn't around by the end of the season to share in that celebration.  My family had moved back to Lawrence where I landed back in junior high.  I would go to state to watch Abilene's fine run and state along with an eye on my future teammates at Lawrence High and a future training partner, Kent McDonald.