The magical, mystery tour also known as the U.S. Olympic Marathon Trials will hit the streets of Los Angeles this Saturday at just after 1 p.m. Eastern Time.  You can watch the drama unfold on NBC News.  That's unfortunate.  It means both the men's and women's races will finish just after Noon Los Angeles time.  That means it will be hot.  That means it could wreck havoc on the team selection process.  Warm weather could be the great equalizer.

I am more of a fan than an expert, but I've been following American distance running for almost 50 years so I think I have a few valid insights to offer about these two races.  Let's run down the men's contest which is a lot more wide open than I think the experts would lead the public to believe.

Galen Rupp, the Olympic silver medalist at 10,000 meters, is the favorite to win the shindig.  It makes sense save for one important problem for this great runner.  Saturday will be Rupp's marathon debut.  I think that's a much bigger deal than anyone realizes.  Training for 26.2 miles is one thing.  Racing it is a completely different mess.  I believe this leaves Rupp vulnerable.  Given his immense talent I think he can finish in the top 3, but winning it outright seems unlikely.

I think the warm temperatures expected in L.A. could help 2004 Olympic silver medalist and 2012 4th place finisher Meb Keflezhigi.  Meb be 40, but he's a shrewd tactician and he handled the warm weather of Athens and London without a lot of problems.  Unless age is his undoing, I don't see anyone beating him.

I believe the other two contenders for the podium are Olympic veteran Dathan Ritzenheim and Luke Puskedra.  Ritz says he doesn't like warm weather but he more than held his own in the 2008 Olympic Marathon heatfest in Beijing.  Again, he's experienced and that counts for a lot in a race without pacers.

I like Puskedra because of his showing last fall in Chicago.  I think the handful of marathons that he's run could be the difference between this Duck or the other Oregon grad, Rupp, making the team.

On the women's side it should be a replay of the 2012 Trials held in Houston.  There's Shalane Flanagan, Desi Linden, Kara Goucher and Amy Cragg.  It will take a major meltdown by a couple of these four to allow another American woman to sneak onto the podium.

The only sure bet out of the core four is Shalane Flanagan.  She may be the veteran of the group but her experience and toughness makes her a lock for the team.  Linden has struggled through injuries since the 2012 London Games and she's something of a wild card but returned in 2015 as America's #1 ranked marathoner.  Goucher recently showed good form in a half marathon and given her experience she can't be counted out. 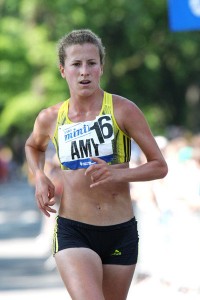 Cragg, a woman who I've had the privilege of tagging along with on a couple of training runs, was the odd woman out in 2012 with her 4th place finish in Houston.  She shocked a lot of folks by making the Olympic Team at 10,000 meters but she's a marathoner at heart.  Her inconsistency is my biggest concern.

A lot of folks want to throw master's runner Deena Kastor into the mix.  I just don't think the 2004 Olympic marathon bronze medalist has the wheels to stay up with this group anymore.  But if the heat does take its toll, Kastor could be the surprise.

The two trials races will make for great television viewing and real, reality drama that even Hollywood can't script!
Posted by Rink's Ramblings at 8:20 AM