Looking to the Future

The tragic events surrounding this weekend's Florida State Track and Field Championships overshadowed the legacy that lies at the feet of Coach Jeff Sommer.  His shocking death dimmed the incredible performances turned in by a handful of young women who will shape the next few years of high school distance running in Southwest Florida.  Not surprisingly, their achievements are directly and indirectly the result of Sommer and the standards he set for his athletes.

It is impossible to speculate on how good the Oliveira sisters could be, especially given their youth.  This dynamic duo has the potential to re-write all of the records ever set in Lee County.  They could be a twin version of the prep prodigy, Mary Cain.

Estero's cupboard is hardly bare.  Back for another year of high school cross country and track are Daley Cline and Breeana Salcedo.  Those two will team with junior to be Megan Giovanniello to carry on Sommer's legacy.  This trio should help make next fall's cross country battles with Fort Myers High School epic. 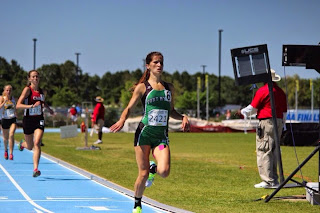 That brings us to the Green Wave's Krissy Gear.  How many national class distance runners do you know who scored at their state meet in the pole vault?  Gear is an incredible athlete who has only begun to harness her ability as a distance runner.  She ran a sub-5 1,600 earlier in the season before claiming the 3A title on Saturday.  She followed her that race with her best 800 of the season, finishing 2nd in 2:16.32.

Gear could be the best distance runner in Lee County since Sommer coached Footlocker finalist Bona Jones.  Her ability to run off of a fast pace with a powerful kick could bring some out of this world times, before Krissy graduates from Fort Myers.

Next spring there could be as many as a half dozen Lee County girl's under 2:15 in the 800.  Nationally, most state's don't produce even one girl under 2:15 in a given year.  I don't believe we'd be seeing any of this without years of groundwork done by Jeff Sommer.  Think about it.
Posted by Rink's Ramblings at 6:39 AM