Two weeks from today for the first time in 11 years I will hop aboard a jet and fly west to Oregon for one of the best track meets the world has to offer.  The Prefontaine Classic is always a distance running stud-fest.  It's a meet I first attended back in 1985 on a rainy Saturday evening where I watched Mary Slaney take down the American Record for 5,000 meters. 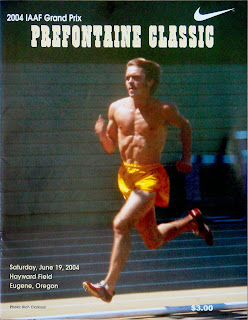 The second time I made it to the meet was in 1994. The star was pole vaulter Sergei Bubka.  I sat right in front of Bubka's family that evening.  Down on the infield NIKE's John Capriotti spotted me sitting with the Bubka's and invited me down on the infield to meet the great vaulter.  I had gotten to know Capriotti when he was the head track and field coach at Kansas State a couple of years before.  It was thrilling to meet the world's greatest pole vaulter.

The third Prefontaine meet, in 2004, featured a fearless mile run by Alan Webb, who dipped just under 3:51 in a solo effort.  That's probably my favorite moment and my favorite year for attending this track and field classic.  I went the meet that year with a good friend, Chris Ronan.  He wanted Webb's autograph, so we made our way down to the media area where Chris stalked his quarry.

This year's meet promises a great men's mile and unbelievably deep fields in the women's and men's 800 meters.  Again I will attend the meet with Chris.  This year I plan to make sure we take plenty of pictures and gather a lot of mementos.

The best part of the meet is Eugene.  The city has a feel to it that is impossible to describe unless you've been there.  The air is fresh and full of pine.  The running routes are numerous and nothing beats heading across the footbridge that spans the beautiful McKenzie River for a quick run along Pre's Trail.

And then there's Hayward Field.  It has changed so much since my first visit in 1976 when I covered the U.S. Olympic Track and Field Trials.  The track back then was rock hard with a sandpaper type substance covering the surface.  A cinder lane circled the inside part of the track and the grandstands were old and weathered.  Just to the west of the newer, bigger grandstands, a cinder track used to sit where the athletes would warm up and where I watched in wonderment a workout one day which featured Alberto Salazar, Rudy Chapa and Bill McChesney.

Now the facilities are fresh and modern.  The track features a state of the art mondo track.  The cinders are long gone and the modern warmup track sits just to the south of Hayward Field itself.  Two more weeks and I get to go to running heaven.
Posted by Rink's Ramblings at 6:02 PM