We're on the backside of one of the coolest springs we've ever seen in our 11 years in Southwest Florida and of course I waited until last weekend to run a race.  I just wasn't motivated for the most part of the spring.  Coming off my injury in January my training while steady, was painfully slow.  It felt terrible to waste such a great winter and spring but my heart just wasn't in it.

I had really wanted to run a 5K in April.  The urge to sleep in on Saturdays overwhelmed my desire to race.  Then came May and there really aren't many good races to run.  Even though I had Memorial Day off, I skipped that race too.  The desire to sleep in was just too strong.

So finally, last Saturday, I entered the Fort Myers Track Club's Membership Run.  It was just a mile from the house so it meant I could get the maximum amount of z's in, before heading over to lace em' up.  The Czarina came along and so did the son-in-law Vlad. 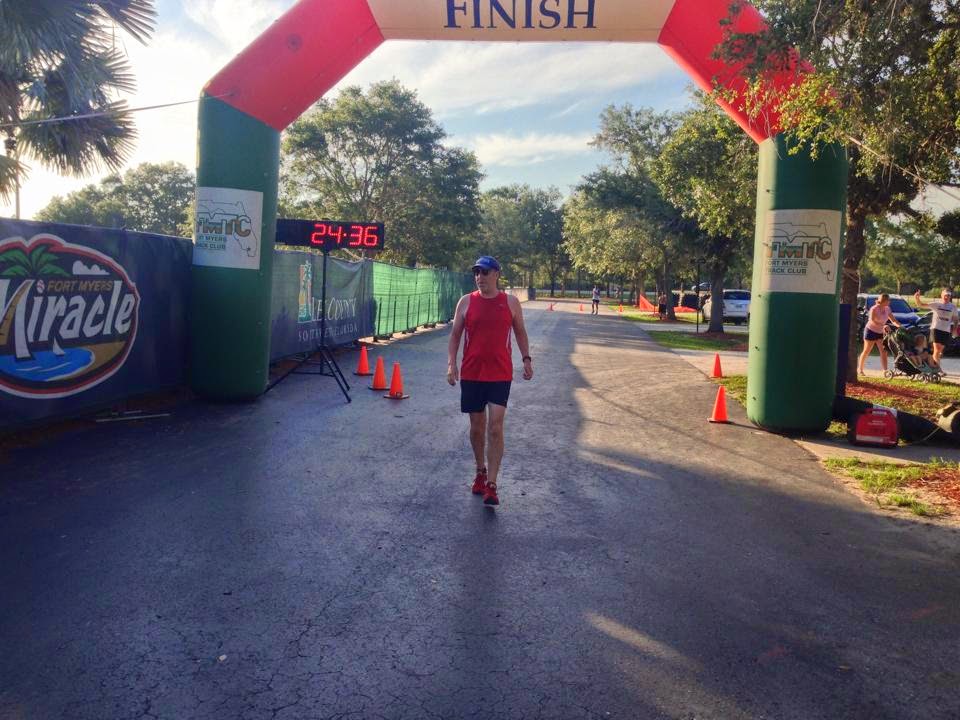 I was just hoping to run in the mid-24's, which is what I was running in much cooler weather last fall.  It wasn't humid, but I can tell you by the last mile of that 5K I was roasting.  As you can see in the picture I managed to meet my goal.  The Czarina finished about 3 minutes behind me, the son-in-law 1 minute ahead.  He was within reaching distance for the first mile but my slow fade did me in.  I think I could take him in a half marathon but who knows.

Anyway, it felt good to get one under the belt after 6 months of race avoidance.  I doubt that I will run anymore races this summer (yes, they actually exist in our summer sweat box) because I don't want to drown in a pool of my own perspiration.  I swear I'll be back in sub 22 minute shape by next fall, really!
Posted by Rink's Ramblings at 6:41 PM