I wasn't very aware of the world of sport in 1964.  I don't remember watching the Olympics or paying much attention to any athletic competition.  That awareness wouldn't take flight until 1965 when Sandy Koufax became my hero and not long after my mother got me a subscription to Sports Illustrated. 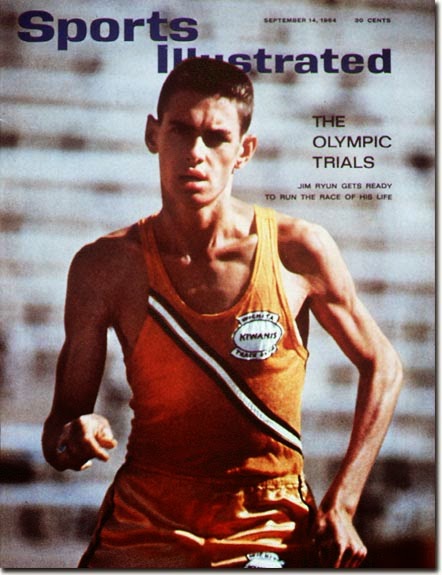 I wasn't aware of a Kansas kid by the name of Jim Ryun.  It's remarkable that so much history was happening less than 100 miles from where I was living at the time.  Once I discovered Jim Ryun, my quest for all things Ryun was pretty much unstoppable.  I was glued to the television in 1966 when one of the Wichita stations aired a documentary on him.

I can remember watching him race Kip Keino in 1967 on ABC's Wide World of Sports, the announcers warning that Ryun would have his hands full with the veteran runner from Kenya.  You could imagine my delight when Ryun took flight and raced his way to a world record.  It is a memory stamped on my mind just as watching him compete in person for the first time at the Kansas Relays in 1969.  I remember the agony of watching Keino defeat him in 1968 for Olympic gold and the infamous fall at the 72 Munich Games.

Yet sadly, I have no memories of his perhaps, most stunning achievement.  A copy of it sits on a beta tape in our spare bedroom closet.  It is an old film that shows most of Jim Ryun's first sub-4 minute mile, the first ever run by a high school boy.  It happened 50 years ago this week.

Ryun went to the Compton Relays in June 1964 having just missed a sub-4 clocking about 2 weeks earlier at the Modesto Relays.  During the making of my documentary about his great running career Jim related to me the story of how Coach Bob Timmons had to grind down his spikes so they would grip the hard clay track.  I remember Jim wistfully wondering what had happened to those historic shoes.

Later that summer Jim Ryun would sprint to a stunning 3rd place finish at the Olympic Trials to earn a trip to Tokyo and the 1964 Olympic Games.  While his trip to Japan was less than memorable, it was a notable chapter in the career of the greatest high school miler in American history.  Alan Webb may have taken down Ryun's record of 3:55.8 36 years later, but his achievement pales to what the kid from Wichita East accomplished.

Ryun was an Olympian as a high schooler.  When Ryun set his long standing high school record of 3:55.8 in 1965, he beat Olympic 1500 meter champion Peter Snell and won a national championship in the process.  The time was an American record, which would stand for one year until a 19-year-old Ryun would break it by setting a world record of 3:51.3.

Jim Ryun can still be proclaimed America's Greatest Miler 50 years after having broken the magical threshold.  It's an astounding claim considering the great runners that would follow, Rick Wohlhutter, Dave Wottle, Steve Scott and Alan Webb.  Ryun's accomplishments, especially his run in Compton, will long endure.

Editor's note:  I put the date of this historic race as June 6, 1964.  I took the date from Bob Timmon's split log which covers most of Jim's races.  Track and Field News says the race took place June 5, 1965.  Who am I to argue with the self-proclaimed Bible of the Sport!
Posted by Rink's Ramblings at 5:14 PM