My Love Affair with Dan Patrick

When it comes to talk, Dan Patrick is the best thing going on radio and television, period.  This from a man who relishes the Howard Stern Show.  With Dan, it doesn't matter if you're a sports fan or not, because his style and sensibility bridges the gap for the non-sports fan, just ask the Czarina.

I remember Dan back when he was a pup working for CNN back in the 1980's.  But he became a broadcast legend in the 1990's with "The Big Show" aka SportsCenter on ESPN.  Sunday nights when he was teamed with Keith Olbermann was the best television outside of "Seinfeld" that you could hope for.  I was drawn to the show by Keith Olbermann's great writing, but Patrick slowly grew on me.  His catch phrases such as "the whiff" and "en fuego" are the stuff of legend.  The chemistry was palpable.

Then ESPN got the good sense to give Dan an afternoon slot on the radio and boom.  He was sharp, incisive and a great interviewer.  ESPN radio was horrid save for Tony Kornheiser and his replacement Colin Cowherd.  Stumbling upon Dan Patrick's show stuck in the no-man's land of afternoons was always a delightful listen if you happened to be away from work, stuck behind the wheel on the way to some dreary task or another.

Somewhere along the line ESPN decided that Patrick was replaceable.  The petulant Olbermann was long gone as was "The Big Show" with him and I suspect Patrick didn't feel appreciated.  I also suspect he was growing tired of the direction ESPN was going.  It had become this perpetual machine of self-promotion and aggrandisement and less and less about the story of sports.  Perhaps it was the money the money or a desire to do something that he could call his own but Dan Patrick left the place he calls "The Mother Ship" in 2007. 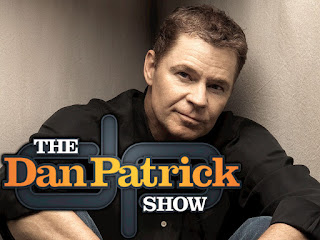 What came next was "The Dan Patrick Show."  When I first heard it sometime in the fall of 2007 I thought it was okay.  It took time for me to connect with his new program and line-up of co-workers lovingly dubbed "The Danettes".  It had a rag tag feel broadcast from the attic of Dan's home in Connecticut.    I rediscovered it when unemployment came my way in the fall of 2009.  There on DirectTV broadcast from what they called "The Man Cave" was a televised version of what "The Dan Patrick Show" was doing on radio.  The TV was even better than the radio due to the little televised vignettes of the behind the scenes doing.
They had an indoor basketball court, a golf simulator and enough memorabilia to make any sports bar owner drool.  You got a better feeling of the diverse personalities of the four "Danettes" and the importance of their contributions to Dan's show.
But the key to the show's success is Dan Patrick.  He is a fearless interviewer.  He asks the question that his radio colleagues at ESPN are too afraid to ask.  Dan will tackle topics outside the realm of sports, wearing his feelings on his shoulder, daring you to knock him for expressing his pointed opinion.  This week's interview with former Chief's GM Scott Pioli was vintage Dan.  Carefully, Dan got Pioli to speak about the awful murder-suicide of Jevon Belcher for the first time.  It made for riveting listening.
Even the Czarina likes watching in on the boys in the man cave.  I now DVR the show for a kick recap of what's happened and the Czarina even likes listening in on the antics of Dan, McLovin, Paulie, Seton and Fritzy.  She savors the man talk served up with a slice of life and the wisdom of a man who has dealt with the inflated egos of athletes for the past 30 plus years.
Posted by Rink's Ramblings at 8:13 AM