Elijah Johnson dropped 39 on Iowa State Monday night.  Yes, I know I'm a little slow to acknowledge that fact but I wanted to digest, nay savor his tremendous performance, which came as a major surprise given Johnson's horrid Big 12 campaign.

Johnson has shouldered point guard duties this season for Kansas despite being a shooting guard.  Last year during KU's Final 4 run Elijah showed he could fill it up.  But this season during conference play he's looked unsteady, often unable to finish at the hoop.  Against Kansas State last week you could see something of a resurgence that came full bloom during the Big Monday contest on ESPN.

Johnson's performance left me reflecting on a couple of the best shooting performances that I've personally witnessed by a Jayhawk.  The last big scoring night that I saw was more than 30 years ago when Tony Guy torched Arizona State for 36 points in the NCAA tournament.  That ASU was loaded with future NBA players like Byron Scott and Alton Lister.

Tony Guy was a silky, smooth shooting guard out of Baltimore.  At 6'6" he was one of the first big shooting guards to ever play for the Jayhawks.  He was the kind of player you would expect to score at a 15 to 18 points a night but he never rose to that level.  Part of it was the system he played in with then Kansas coach Ted Owens.  Shooting by guards were almost frowned upon on an Owens' coached team.  He wanted the ball pounded into the post.

But Tony's performance pales in comparison to another Owens' coached shooting guard who torched Missouri for 50 points 41 years ago.  Bud Stallworth's game against a very good Tiger team is the best individual performance I've ever seen by a basketball player, period.  Had the college game had a three point line in 1972, Bud would have scored 55 points or more easily that afternoon. 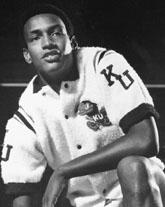 Bud had been a very good starting guard on a great Final 4 team the year before as a junior.  His senior year, he had no supporting cast.  Kansas had two terrible big men, Randy Canfield and Wilson Barrow and a hard nose point guard in Aubrey Nash who couldn't shoot a lick.

Stallworth's game against Missouri came as a huge shock.  The Tigers were heavy favorites that day and Bud literally shot Kansas to a victory hitting a variety of long range jumpers and hard driving shots in the lane.  By the end of the game Missouri was fouling Stallworth with zeal trying to stop the onslaught but to no avail.

I remember Bud's 50th point being a big jumper from beyond 25 feet that brought the roaring crowd to its feet.  The fans poured out onto the floor as the pep band continuously played the Budweiser beer jingle "This Bud's for You."  Stallworth would finish the season as an All-American, the only bright spot in a drab 13-13 season for Kansas.  Not bad for a trumpet player from Hartselle, Alabama.