A very important piece of Bo Jackson's baseball legend was recorded thanks to yours truly.  Saturday night ESPN aired one of its great 30 for 30 series on the legendary Heisman Trophy winner from Auburn.  Bo Jackson's decision to play baseball and initially bypass the NFL was huge.  Bigger still was the fact that Jackson decided to play baseball for the Kansas City Royals.

Back in the 1980's the Royals were one of the best baseball franchises in major league baseball.  I had the good fortune to work at WDAF which was the television home of the Kansas City Royals.  We would broadcast 40 plus road games a year.  We covered the Royals in a big way.  I can remember night's when then team co-owner Avron Fogelman would call the newsroom and ask for the satellite coordinates for that night's game.

But back to Bo.  He was a baseball wonder.  It's been said and written, but the ball sounded different coming off Jackson's bat than any other major league player.  It exploded off his bat.  I saw Jim Rice play, Dave Winfield, Reggie Jackson, and even Hank Aaron play.  No one hit the ball as hard as Bo.  And no one was faster getting down the line to first base than Bo.  Watching Bo sprint to first base on a routine ground ball was a thing to behold.  No infielder could lob a throw to first was Jackson roaring into first. 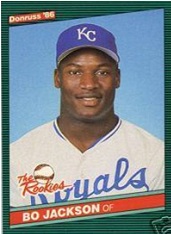 Bo hit his first home run, a monstrous blast, against the Seattle Mariners, after being called up from the minors in September of 1986.  Back in the 1980's not every major league game was televised.  On most nights we could send a live truck out to Royals Stadium and plug into the satellite truck and feed back the highlights as they happened live.  Less than a dozen times a year a game wouldn't be televised and you would have to decide if it was worth sending a photographer to get the night's highlights.

The Monday night of September 15th was one of those nights.  I was the 10 p.m. producer at WDAF and it was my call whether to send a photographer that night.  Given the fact that I was a huge sports fan and loved the Royals along with my sports director Frank Boal, the decision was easy.  The only problem was that my only option for shooting the game was Phil Maslin.

Phil is a great photo journalist.  He has a wall full of awards to prove.  In fact, the only award I've ever won from the Society of Professional Journalists is thanks to Phil.  But Phil hated shooting baseball.  It wasn't his strong suit.  Every one of our photographers loved shooting baseball because it meant a night of free food and getting to watch a baseball game for free.  When I told Phil he was shooting baseball that night the look on his face said it all, he would have rather shot another stupid homicide than go to the stadium.

As fate would have it, Phil was the only photographer sent to the game.  KMBC and KCTV didn't send a shooter.  So Phil Maslin was the lone soldier that captured Bo Jackson's historic blast deep to center field in Royals Stadium.  It wasn't pretty, in fact it was a little herky jerky, but it shows the massive clout and thus added to the growing legend of Bo Jackson.

Thinking about that night still makes me feel good.  Royals baseball always made me feel good.  Whether it was Gordon Docking's epic live shot from the Royals' locker room in Toronto when Kansas City beat the Blue Jays to win the 1985 American League pennant or standing in the locker room with George Brett, Bret Saberhagen and Willie Wilson after they had beaten the Cardinals to win the World Series, my memories of baseball in KC are wonderfully endless.  It's a shame Kansas City hasn't seen even a division title in 37 years.
Posted by Rink's Ramblings at 6:09 PM