Some Baseball Life in Kansas City 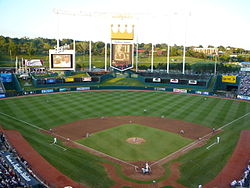 Kansas City loves baseball.  It positively glowed for the 2012 All Star Game.  It marked the first time in a generation that a real sense of excitement enveloped the city.

What most of America doesn't know is that the Royals were the epicenter of the sporting culture of Kansas City and the 300 miles that surrounds it for a solid 20 years.  It took Carl Peterson taking the Chiefs off life support Ewing Kauffman's death to slowly eat away at the top spot the Royals enjoyed throughout the 70's and 80's.

Kauffman Stadium was stunningly beautiful Tuesday.  Of all of butt-ugly cookie cutter stadiums built in the 1970's on The K survives.  In fact the whole sports complex is still something else and despite all of the problems that grips Kansas City it remains a source of public pride.  And forget all the clamoring about a downtown ball park, the two renovations done at Kauffman over the last 20 years have served the ball park well.  Kauffman is a great place to watch a baseball game.

What's sad is what David Glass let happen to this once proud franchise. He pissed off the entire city when the team was struggling and he hinted at moving the team to the National League.  It threw the whole ownership change into a six year plus turmoil from which it never recovered.  Then when it looked that no one with the deep pockets needed to keep the team in Kansas City would step up, Glass resurfaced, the public having forgotten and forgiven his horrendous missteps and welcomed him as the owner.

What a disaster.  He ran the team like a Walmart cutting corners and running in and out an array of washed of free agents through the team, allowing the farm system to flounder and letting good players slip away to other teams.  Then he hired Dayton Moore, a man from the Joe Burke/John Scherholtz school of baseball and every so slowly, but surely, watchable baseball has returned to K.C.

If Glass would just spend a little more and lock in some of these talented players to long term deals, the team could thrive.  The Royals can draw 2 million plus every year.  Kansas City loves good baseball and goes ga-ga for great baseball.  The city deserves it.  The fans have earned it.  But I don't know that it will ever happen with David Glass as the team's owner.
Posted by Rink's Ramblings at 9:29 PM