Let's get this straight, this isn't a great Kansas team.  It's not even one of the ten best in the last 40 years.  But this ball club has a lot of things going for it as it slides into the Sweet 16.  The obvious are the Morris twins.  If you look back at my first blog on the prospects for the Jayhawks I wrote this team will only go as far the twins can take them. 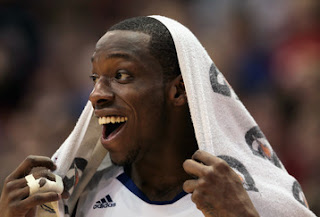 The wild card in this years tournament run is Tyshawn Taylor.  Anyone with half a brain knows that it takes great guard play to win the NCAA tournament.  It took everything Mario Chalmers, Brandon Rush, Sherron Collins and Russell Robinson had to lift K.U. to the 2008 title.
Taylor has no such supporting cast.

The much hyped freshman Josh Selby has been a shadow of himself since his foot injury.  Tyrell Reed and Brady Morningstar are role players at best, much like Robinson in 2008.

Taylor has played remarkably well since his short suspension, reportedly for an unauthorized romantic rendezvous with a member of the women's team at Allen Field House.  The short time out handed down by Coach Bill Self apparently turned on some sort of switch with the New Jersey junior.  His decision making and shooting seems to be improving game by game.

Now add in some bracket busting magic and the Jayhawks appear to be in the drivers seat on its quest to make it to the Final 4.  I can't imagine that Richmond will be any tougher than Illinois for K.U.  The team that can play a physical style to could give Kansas problems is Florida State.  If K.U. gets to the Elite 8 and should they face the Seminoles, I think K.U. has too much depth and offense for Leonard Hamilton's team to overcome.  But that's the magic of this tournament, we won't know for sure until the games are played.  And as long as Tyshawn comes to play, Kansas will be a force to reckon with.
Posted by Rink's Ramblings at 9:30 PM