Some how, some way, the Southwest Florida high school cross country teams made it through the 2020 season, something quite a few of their football counterparts failed to do.  I think it's a credit to all of the coaches across Lee County that their teams made it to November with more than a half dozen squads making it to Tallahassee to compete at the State Championships.  It's nothing short of a miracle. 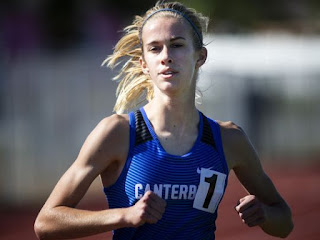 Ladies first.  Canterbury's Jessica Edwards, a superb middle distance runner, landed the highest finish of her fine high school cross country career by taking fifth in the Class 1A race.  Right behind her in seventh place was Ava Povich from ECS.  Only a sophomore, Povich made giant strides improving more than 30 spots at State this year.

The top girl in Lee County and Southwest Florida is Amy Meng.  The junior from Fort Myers High led her squad to a third place finish in Tallahassee while taking fifth as an individual.  She wasn't even on the Green Wave squad last year.  Meng has the work ethic to be one of the best runners to ever come out of Fort Myers High.

The hidden gem on the top girl's team in Southwest Florida was Fort Myers senior Anna Fischler.  A nagging hip injury kept Fischler from training until deep into the season.  She went from running 24 minutes in a JV race in early October to finishing 23rd at the State Championships.  Her heart and tenacity is something to admire.

Kudos go to the Estero girls led by Madison Hood for making it to State and to the girls of Bishop Verot, a young and promising squad that could give the Green Wave a run for its money next season for county bragging rights.

It's hard to pinpoint a single boy that dominated the season.  Lehigh Acres junior Evan Meyer had a terrific season although he appeared to run out of gas at the Class 4A race.  Senior Ogler Bartolon of Dunbar had a great season and led his team to State in Class 3A.  The same can be said of SFCA's Ethan Tank who also took his team to State while finishing 15th in the Class 1A race.

Bragging rights for the best team belongs to Fort Myers but by a razor thin margin over Dunbar.  Junior Colsen Palmer was consistent all season along with seniors Liam Holston and Paul Colsen in leading their team to a fifth place finish in Class 3A.

That being said based off his finish at State and his season resume Estero junior Kolton Pickard is the best of a good group. Pickard finished a respectable 13th in Class 3A.  He did it while overcoming some nagging mid-season injuries.

Pickard will be back next season along with Palmer, Meyer and Bishop Verot sophomore Cooper Banks.  Look for Povich to continue her improvement and for some epic battles with Meng next fall.  But lets hope those duals resume this spring and that Covid doesn't put the road block on high school track and field.

Posted by Rink's Ramblings at 6:53 PM