Things are beginning to percolate around the Southwest Florida running scene.  A nice cool front offered distance runners to race under tolerable conditions but a strong north wind ruined any chance of fast times Friday night at Bishop Verot but it did hold temperatures down for Saturday's meet at Golden Gate.

1.  Friday night's girl's 3200 at Verot promised to be the first big race of the season.  Canterbury junior Jessica Edwards was stepping up in distance and would face Fort Myers senior distance ace Stephy Ormsby.  After a lackluster 800 leg in the 4x800 Ormsby scratched the 3200 leaving Edwards alone to face the winds and Estero's Mia Perez.

Edwards slowly but surely pulled away from Perez and ran 11:31.7 winning by 20 seconds.  Perez showed heart breaking 12 minutes in the terrible conditions.

2.  Sarah Schultz scored a double win at Verot, one coming in the rarely run 1200, the other in the 1600.  Her times were not world shattering, 4:10 and 5:38, but it shows that the Fort Myers senior is rebounding after an unsatisfying end to her cross country season. 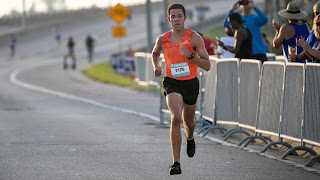 3.  Franklin Caceres finally emerged at the Jim Smith Invitational at Golden Gate.  The Ida Baker senior ran the 3200 in 10:02.74, the second fastest time in Lee County behind Estero's Kolton Pickard.  Pickard opted for the 4x800 at Verot and an easy win in the 1600 in 4:39.7.  Estero's boys took every distance race save for the 800 at Verot.

4.  Lehigh Acres may have a super sophomore in the making.  Evan Meyer won the 1600 in 4:38.63 at the Smith Invitational.  The mark is the fastest in Lee County though it's very early in the season.

5.  Fort Myers junior Liam Holston made his first track appearance of the season racing the JV 800 at Verot.  Foot issues has hampered the start of his track season following an exceptional fall in cross country.

Posted by Rink's Ramblings at 8:44 AM