Almost four months ago I wrote that the University of Kansas basketball team was one injury away from being a .500 team.  Reflecting back, I'm amazed at how right I was about this team.  It was all about the guards.  But this season unfolded in ways I could have never imagined.

Devonte Graham more than filled Frank Mason's roll as floor general.  Graham proved to be a better fit than Mason with this guard heavy bunch.  He should win the Wooden Award.  No one played more minutes for Kansas since Danny Manning roamed the hardwood.

Then there was the heralded transfer Malik Newman who finally turned into Malik Newman over the last 30 days.  LeGerald Vick was up and down all season.  Fortunately he was mostly up when it counted.  And finally there's Svi Mykhailiuk.  Yeah, he shot great all season and he learned to drive to the bucket but what I think was overlooked was his massive improvement on the defensive end of the court.  Svi's effort on Sunday against Duke's Marvin Bagley was the cherry to his season on defense. 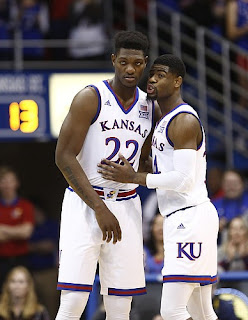 So the guards gave us everything we should have expected.  I never dreamed that Mitch Lightfoot and Silvio DeSouza would be major contributors.  Lightfoot is fearless.  He's got hops and simply refuses to back down on either end of the court.  I was right about Billy Preston.  He never saw a minute and it somehow didn't derail the season.  I was wrong about Doke Azubuike.  It turns out that he has more offensive skills than Greg Ostertag.  Sure, all he does is dunk but he his offensive game is pretty slick.

The reason Kansas is in the Final 4 is Silvio DeSouza.  His transformation from a high school senior looking completely lost in his first few minutes in January to being a confident, physically compelling post presence is nothing short of miraculous.  Regardless of what happens in San Antonio the basketball future for the Jayhawks will remain bright indeed.  And Bill Self doesn't get enough credit for that.

Posted by Rink's Ramblings at 9:32 AM