Once upon a time Gannett had a sterling reputation as a television news operator.  Most of their stations were among the best of the best.  Then the Internet came along destroying their newspapers while the 2008 recession blew up TV station budgets everywhere.  Gannett got cheap.  And to compound things instead of splitting up its television and newspaper operations 10 years ago it bled its TV operations to support its dying newspaper chain.

The split finally came two years ago and a company called Tegna was created.  It has quickly sunk the lowest depths of television news that would rival renowned TV bottom feeders, Sinclair and Nexstar.  A handful of their stations, in Denver and Minneapolis, are still producing amazing work.  But many high profile names have been chased out of their jobs even at those stations, in order to save money. 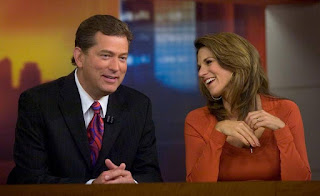 How bad is the cutting?  Look at News10 in Sacramento.  I worked there for one year from 2010 to 2011.  It was a very rough environment, manned by incredible people.  Tonight news surfaced that the two main anchors that I worked with, Dale Schornack and Cristina Mendonsa, are being let go.  That means that of all the on-air people I worked with in 2011, save one, is left.  And I'm betting meteorologist Monica Wood will be gone when her contract is up.

The station has shipped off or chased off more than two dozen very experienced and very talented anchors, reporters and photojournalists.  The station, despite limited support and resources, when compared to market powerhouse KCRA, did a very good job of holding its own.  But money matters and losing 200 plus years of experience in the newsroom just doesn't appear to matter.

And it just wasn't the faces on air that have been chased off.  As best as I can tell, every single producer that I managed is gone.  My replacement, who was eventually named assistant news director is gone.  All of the web people I worked with are gone.  And only one soldier from the assignment desk remains.  Oh... and the station is on its third news director since 2011... not exactly a sign of great station stability.

Sacramento isn't some backwater small market station where massive turnover is the norm.  Experienced is valued in top 20 markets.  The NBC and CBS stations in that market have very, very experienced staffs.  But it appears Tegna has turned its back on great story telling and great journalism.  It's a disservice to the public that the company pledges to serve by broadcasting over the public airwaves.  Shame on Tegna and mark my words, the bloodletting at their stations is far from over.
Posted by Rink's Ramblings at 7:37 PM