Nothing Beats A Long Run

I'm not Jack Daniels, I'm not Arthur Lydiard, I'm not Alberto Salazar, but I know one thing that these three great distance coaches all know, if you're a distance runner, long runs matter.  10 miles is NOT a long run.  Not even 12 miles qualifies as a long run.  A long run 16 miles or more.  A long run takes between two hours to two and a half hours.

Why is this important to me?  Because I know too many runners who think that logging 10 to 12 miles every Sunday will get them in half marathon and marathon shape.  The sad truth is they are cheating themselves.

I ran my first marathon on runs no longer than five or six miles.  I suffered and ran 3:14.  Not bad, but the only reason I ran that fast is because I was just 19 and I was a reasonably trained runner in high school with pretty decent mile and 2 mile PR's.  Two years later I broke 3 hours in the marathon with my longest run being just 10 miles.  Both marathons had the same thing in common, I suffered like hell over the last six miles.

I ran a couple of more marathons in my 20's, both with the same kind of haphazard training and both ended in the 3:11 range.  It sucked.  It hurt.  But I knew deep down inside if I could run 2:57 on 25 miles a week at 19 I could run much faster with a decent training regiment.

I turned to a private coach, Tom Dowling, at the end of 1985.  The centerpiece of my training was a weekly Sunday long run.  It started at 8 miles and after several months I progressed to 21 miles.  It didn't take long for this run, this impossible 21 mile beast, to become an enjoyable part of my weekend.  I looked forward to it.  We had five to six planned water stops.  We had a large group, usually eight to 20 runners, of different abilities, all with the same goal, racing faster.

I ran my first marathon 10 months into this new program and broke 2:50 with ease.  The only difficult section of the run was the last 2 miles and that was mainly because it was uphill.  I was hooked.  I followed it up eight months later with a 2:51 in extremely hot conditions and I knew I could run even faster, maybe under 2:40.

In 1987 I moved to Phoenix where my new long run group did just 16 miles.  Sometimes I would show up early and do a few extra miles, but the bulk of my long runs were at that distance.  My marathon times stayed pretty consistent topping out with a 2:48 PR in 1989 when I was actually running just 40 miles a week.

When I ran my fastest marathon in 1990, I probably did at least three long runs of 25 miles in the three months leading up to it.  I broke 2:40 and I didn't suffer one bit.  It was the easiest race I had ever run.

The point of all this is when I trained in a serious manner, the 16 to 21 mile long run was a fixture in my training routine all the way up until 2003.  When I was shooting for a marathon I knew that I needed at least six to nine long runs in the three months leading up to the marathon in order to complete in a manner in which I didn't suffer. 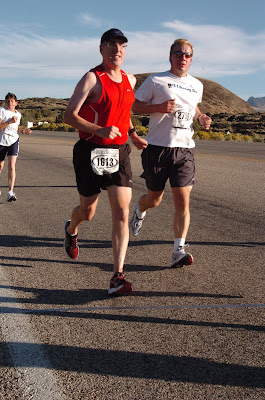 The last marathon I ran in 2010, I tried to shortcut my training.  I had a good six months of training, but I only had three runs of two hours or more.  I thought that at age 54 I could get away with it because I had run for so many years.  The hot weather and my age did a number with me and I ran my slowest marathon by 40 minutes.  It just goes to show, half measure avail you nothing.

Now I realize that most runners that come across my path in a store who want to run a marathon are only trying to complete it.  It's a bucket list item.  But I say if you really want to tackle, take your time.  Don't shortcut yourself.  Training for a marathon in three or four months is just shortchanging yourself and the experience.  Carve out a year.  Build a training program that allows you to build your base to such an extent that the marathon doesn't tear your body apart.

Training for marathons in Southwest Florida presents two tremendous problems.  The weather from June through the end of September is awful.  You can go out at 5 a.m. but the humidity eats you alive.  That's why I believe the 16 mile option is probably the best way to go for runners in our area.  The other issue is the lack of hills.  Hill training is an essential component to any marathon training.  You need to hit the bridges at least twice a week, especially during that long run.