The spring and summer of 1987 were life changing.  My training had progressed to the point where I felt that a 2:45 marathon was well within my grasp.  I had enjoyed some monster training runs and had rolled through long runs as long as 25 miles.  So I signed up for the 1987 Grandma's Marathon in late June.

Tom Dowling had me gun the last 8 miles of a 25 mile long run two weeks out from Grandma's at 6:30 pace and I did it with ease.  I was ready for the race but my personal life was in turmoil.  Professionally I felt unappreciated and had been job hunting for the better part of a year.  Three weeks out from Grandma's I had received a job offer to move to Phoenix from Kansas City.

My boss at WDAF found out about the job just days before the race.  I got a phone call from him the morning I was to come into work to tell him I was leaving after almost seven years of service.  He was unhappy screaming at me about my treachery.  I was unfortunately in the throws of food poisoning suffering from vomiting and explosive diarrhea.  I told him our come to Jesus meeting would have to wait a day because I was sick as a dog.  That only added to the ass chewing.

That day also sealed my fate when it came to my upcoming race.  Unbeknown to me the illness had ravaged my body.  Come race day, although I felt recovered, but it wasn't meant to be.  I had good company for the first 10 plus miles at Grandma's.  I was running with a friend of Tom's, Kathy Northrop, who was looking for an Olympic Trials qualifier.  I was looking for a 2:45 marathon and so was Kathy.

The morning turned unseasonable warm for the north shore along Lake Superior.  We were on pace at 10 miles.  By mile 16 I could tell I was in trouble and Kathy left my side.  I felt great, but the 6:15 pace just wasn't there.  I could barely manage 6:40 miles.  By mile 21 I could see Kathy getting in the meat wagon, the heat had ended her quest and I shuffled on just wanting to finish.

I hit the finish line just under 2:52 and I knew that besides the heat, the depletion of much needed nutrients from my body from the food poisoning just days before had also taken its toll.  It was sad but I would find myself leaving Kansas City for Phoenix where I would find a new training group and eventually a new coach.

The transition to Phoenix was tough.  The heat there is undeniable.  I was fortunate in that I immediately met local running legend Craig Davidson, who steered me into his Mummy Mountain training group and my 21 mile long runs were whittled down to a mere 16. 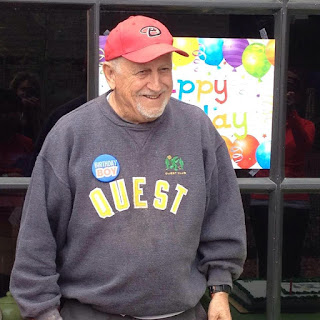 I felt I needed more speed so I sought out a private coach and ended up working with another legend, Fred Moore.  Coach Moore had produced national class marathoners from Mike Scannell, to Lisa Weidenbach and Trina Painter.  He also coached cross country at Phoenix Community College.  Fred Moore is a great coach.  I just wish I had really listened to him.

I returned to my old habits that stretched back to my high school days of racing his workouts, instead of doing what he wanted me to do.  As my race times hit a wall, he kept suggesting I read a book, "The Tao of Poo."  I thought why would a crazy book about Winnie the Pooh help me run faster.  The frustration stretched through a 2 year period and finally I purchased the book and made a phone call.

The phone call was to Tom Dowling, who immediately told me to stop racing my workouts with Fred.  While Coach Moore had gently suggested to take it easier, Dowling flat out told me I was leaving my race efforts in those workouts.  But reading "The Tao of Poo" was eye-opening.  It was a primer about how to train and how to race.  I suggest it for any runner serious about improving their times.

By the early winter of 1989 in my first 10K after reading the book I put the book's message into practice.  I wasn't in particularly good shape so I expected to run my usual 36 minute 10K.  I went out at a leisurely effort deciding to let the race come to me.  Sometime after 2 miles I began to pick people off.  I hit the finish line in 35:35 stunned by the time and by the ease of effort.

I had drifted away from Fred Moore's group.  I was an infrequent member of Craig's Mummy Mountain group.  But God bless Craig, he wouldn't let me go completely off the rails.  He was in my ear about running the St. George Marathon with him.  So by September I was running but my racing was horrible.  A week before St. George I ran a 37:54 10K which told me I would be lucky to run under 2:55.

The following week in St. George I found myself hitting the half marathon in 1:26 figuring the death march was about to begin.  As I hit the first of two amazing descents on this downhill course another runner came flying by me and scolded me, "It can't hurt any worse."  Those words sparked something and I followed him then passed him running mile 14 to 15 in 5:40.

Suddenly my legs felt fresh and while the last three miles were tough I managed a 2:48:50 marathon, an unexpected PR.  After hitting the finish line I vowed to myself to return to St. George next year and break 2:40.  Although my training was re-energized, my personal life was in turmoil and I bid farewell to coach Moore, Craig and Phoenix and returned to Kansas City.
Posted by Rink's Ramblings at 7:36 PM