When I started my life as a runner, I drew inspiration from Jim Ryun.  It was easy.  He was a Kansan who went to high school in Wichita, a mere 60 miles from where I was growing up in Abilene.  As I began to read about Ryun's exploits, my eyes were opened to other distance running greats.  There were Olympic legends like Finland's Paavo Nurmi and Czechoslovakia's Emil Zatopek and the man with a multitude of world records, Ron Clarke. 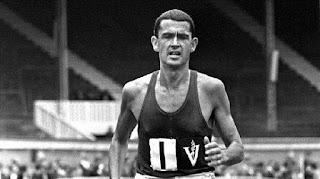 The Australian legend died Tuesday at age 78.  He is in my estimation, the greatest distance runner who never won Olympic gold.  The best he ever managed was a bronze medal at the 1964 Tokyo Games in the 10000.  He was undone by American Billy Mills and Tunisia's Mohammed Gammoudi.

The following year Clarke went on a record setting spree, the likes the world has never seen.  During a 44 day tour of Europe he set 12 world records, nine in just 21 days.  The bulk of his records came at 5000 and 10000 meters.  He was the odds on favorite to win gold in 1968 except for the fact that the race was run in the high altitude of Mexico City.  Clarke ran courageously, collapsing in 6th place.  Doctors would later learn that the run had permanently damaged the great Aussie's heart.

The story that endears me to Clarke is one I first read about 30 years ago in Sports Illustrated.  Clarke made a pilgrimage to then communist controlled Czechoslovakia to meet Zatopek following the disastrous Mexico City games.  The meeting between the two great runners went splendidly.  As the two men parted company Zatopek handed Clarke a piece of tissue with something wrapped in it, saying he deserved this.

Later Clarke went into a restroom to unwrap the mystery object and found that Zatopek had given him his 1952 Olympic gold medal he had won at 10000 meters.  Clarked admitted that he wept.  Zatopek wanted to acknowledge how much Ron Clarke had changed the sport.

Ron Clarke's name belongs in the pantheon of distance greats like Nurmi, Zatopek, Haile Gebresalassie, Kenesia Bekele.
Posted by Rink's Ramblings at 7:43 AM