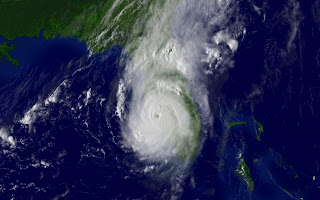 August 12, 2004, I went to bed with a sense of dread.  How I slept, I don't know.  I have blogged before about Hurricane Charley.  Outside of the Hyatt Disaster in Kansas City, this was certainly the biggest local news story that I ever covered.  That Thursday night 10 years ago, I went to bed hoping Charley's forecast track kept it headed to Tampa.  My biggest contribution to our coverage would come that fateful Friday.  I told our News Director at WINK, John Emmert, that we needed to bring Mike Walcher and our satellite truck back from Tampa.  We agreed that Charlotte County would be the best place to set up shop.  Little did we know.

Hurricane Charley slammed into Southwest Florida the afternoon of Friday August 13, 2004 gouging a path across Sanibel and Captiva Islands before roaring up the Peace River bringing devastation to Pine Island, Cape Coral and much of Charlotte County.  Mike Walcher sat in the middle of it with his photographer and engineer Pat Senna watching the Charlotte County Sheriff's Office fall down around them.  I can only imagine the terror.

I know I was terrified for a time.  When it became clear that Charley was turning, about mid-morning that Friday, I feared the storm would bulldoze it's way over the heart of Lee County.  I was genuinely scared shitless.  The newsroom was gripped by fear.  WINK TV sat right next to the Caloosahatchee River so any storm surge could have left us several feet under water  Before we blocked the newsroom doors and sandbagged them, about an hour before Charley hit with its full fury, I went outside.  That somehow helped dispel my fear.

Once the storm hit my, anxiety level dropped tremendously. It was a big blow to be sure but it wasn't as frightening as it could have been. The worst of it had passed to our north. Mike Walcher and his photographer and Dan Bowens and his photographer experienced the worst of it as they were both located in Charlotte County. Both did wonderful work as did all of our other reporters out in the field who risked their lives to report on the storm... Trey Radel, Tim Wetzel, Melissa Keeney, Holly Wagner, Abigail Bleck, Candace Rotolo, and Judd Cribbs all stand out in my mind from that frantic day. We had a dedicated group of photographers like Darren Whitehead, Randy Hansen, Matt Lucht, Melissa Martz, Sean Peden, Tom Urban, Mike Levine, Andrew Miller and a couple of other guys whose names escape me. Even the sports guys, Brian Simon and Clayton Ferraro pitched in.

When the storm started to subside, it was a mad scramble.  Cell phone service was worse than spotty.  I don't think we had a true sense of how bad it was because by the time it was truly safe to venture out in Charlotte County, sunlight was fading.  I remember we had to abandon a live truck on U.S. 41 because it was simply to dangerous to drive it down the highway for fear of hitting power lines.  Looking back I know we were very, very lucky that no one was hurt.

On a personal level it was hell waiting for a phone call from my wife.  Phone lines were down.  She managed to get to our neighborhood grocery store, find a pay phone about an hour after it settled down.  Everywhere in our neighborhood there was damage.  We were very fortunate.  Charley claimed a couple of tree limbs but we didn't suffer the roof damage that many of our neighbors did.

As the night ground on, sometime after midnight and suggested to my boss that we had done all that we could do.  Power was out everywhere.  We were broadcasting on radio but it was so dangerous out that moving crews was risky and you couldn't see any damage in the dark.  So we went off the air for five hours to let our crews re-charge.  I went to a nearby hotel on a whim, knowing there would be no electricity, but I desperately wanted a bed, even if it was just for three hours.  Around 4 a.m. I heard the AC kick on and rested easily.

We went back at it at 5 a.m., fortunate to have the only helicopter in the market.  The video when it started coming in was indescribable.  It was difficult to recognize anything.  It looked like a tornado 10 miles wide had rolled up the Peace River through Charlotte County.  I was just too busy trying to stay on top of our crews, taking phone calls, juggling satellite shots and placating tired producers to really soak it all in.

I didn't get to go home until Sunday.  Emmert felt bad for me and let me go and see for myself that my wife and stepson were okay.  I didn't stay at home for another day.  Spending all day working in air conditioning and sleeping in a non-air conditioned house wasn't an option.

Charley was followed by three more hurricanes in the span of six weeks.  We were lucky that Ivan skipped us altogether and slammed into Pensacola area.  Frances and Jeannie just scraped by Southwest Florida, but that's another story.

Charley took a massive toll on my health and the health of John Emmert.  I know that John made a couple of trips to the hospital due to the stress on his heart.  I was having issues with diverticulitis which was on exacerbated by the storms.  I kept getting sick after every storm.  Come December on a vacation getaway to New Orleans my stomach let go and I spent two weeks in the hospital there.

I hate hurricanes.  I pray that I never have to cover another one.  Too bad the newsroom that I work in now that is filled with green reporters don't feel the same way.
Posted by Rink's Ramblings at 4:21 PM