The Education of Perry Ellis

That title would go to Perry Ellis, a sensation for the Falcons since he stepped on the floor as a freshman, leading Heights to four consecutive state championships.  Kansas fans drooled at the prospect of this 6'8" high school legend joining the Jayhawks this season.  But Ellis hasn't quite made the impact that his predecessor at Kansas, Darnell Valentine, did as a freshman. 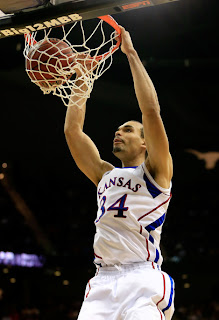 I pointed out back in November that Ellis had some serious holes in his game.  He lacked the strength needed to take contact and finish his shot.  He was a liability defensively, often getting lost out on the floor.  You would see flashes of his brilliance whenever he could launch his soft, feathery jump shot, but December, January and February showed little of the promise that the Jayhawk faithful thought that Ellis could deliver.

But as Kansas basketball rolled in to March, it's as if a light went on in Perry Ellis.  He started taking the ball to the rack with authority.  Ellis started to show that he could finish around the rim.  And most importantly, his quick feet were paying off on the defensive end.

In defense of Ellis, he is a small forward, trapped in a power forward's body.  His ability to play out on the floor, much like the Morris twins, is going to be beneficial in his remaining years ahead.  But K.U. coach Bill Self wants his post players to be able to play in the post.  It's the key to the two man, high-low game that Kansas loves to play on offense.  Now Ellis is beginning to show the muscle needed to play in the low post.  But you've got to love the 3 point dagger he threw down on Kansas State to help the Jayhawks win the Big 12 Tournament.

The Big 12 Tournament was certainly a coming out party for Perry Ellis.  Kansas is just one of a dozen teams with legitimate shots at going to the Final 4.  But with Perry Ellis starting to show the ability that made him a high school All-American, the Jayhawks odds at making it to Atlanta just got a little better.

Posted by Rink's Ramblings at 6:55 PM