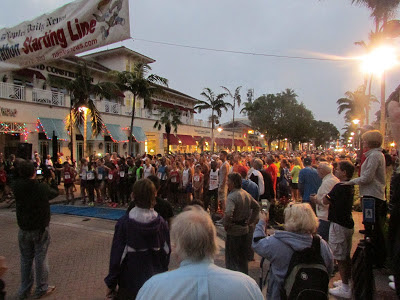 Tis' the season to race in Southwest Florida.  Despite losing five months to a series of nagging injuries I decided to start this racing season with one of the top events in the area, the Naples Daily News Half Marathon.  It's a race that I've never run.  It always seems that I'm either just getting back in shape or coming off some injury when this one comes around.  This year I had a good four months of training under my belt.

The NDN Half is considered one of the best 13.1 mile races in the entire country.  The main reason, it's pancake flat.  The turns are minimal and despite a less than stellar amount of prize money some top-flight runners usually show up for this one.  It attracts the usual Kenyan and Ethiopians looking to cash in along with a passel of Russian emigres' who train up in Gainesville.  This year former Olympian Anthony Famiglietti happen to be in town.  Known as a steeple/5K racer, Fam got stuffed by the Africans which shouldn't surprise anyone.

For me, I looked at this as a good distance tempo run.  I didn't want to try and race and wind up crawling in over the last 4 or 5 miles.  I went out conservatively and ran well within myself.  I wanted to stay under 9 minute pace and run under 1:55.  I did both and finished in 1:52:28, with my chip time being 30 seconds faster.

I started in the middle of the pack and found myself having to be very careful, picking my way through the myriad of idiots who had placed themselves too far up to the front.  With almost 2-thousand people on hand for the start and narrow streets to deal with, it took awhile to thin out the herd.  I must have passed a couple of hundred people in the first mile and an equal amount to the halfway point. 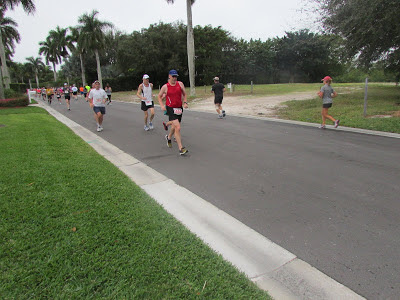 After cracking off a 9:03 opening mile, according to the official clock, I settled in at a comfortable pace between 8:15 and 8:20. By the halfway point I started catching people that I normally beat and my neighbor, who usually beats me. It was sometime after 8 miles that I realized I had a choice, push and suffer to maintain 8:20 pace or ease off and just finish.  I knew that I was pissing away a chance to run under 1:50 but that was the point, run and enjoy.

The course was as fast as advertised.  It was incredibly humid but the 60 degree temperature and overcast conditions helped make up for the humidity.  I finished 450th out of the throng.  Not bad for an old, fat man, who's just getting back into shape.
Posted by Rink's Ramblings at 3:47 PM