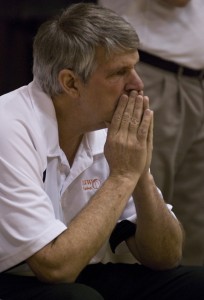 Other than our parents, coaches and teachers create the biggest imprints on our lives.  I've had four coaches as a runner.  First there was Steve Sublett in high school, who kept running as fun as possible.  During my short stint as a runner at Kansas, Bob Timmons while a legend, didn't do me any favors.  Tom Dowling came along when I turned 30 and broke down training barriers I never thought possible, plus he made each and every one of his athletes feel special.  I also ran for a short time for Fred Moore in Phoenix and he taught me how to train and race by teaching me not to try so hard.

But the coach I may have learned the most from never coached me.  I met Ben Meseke in the summer of 1991 just before the start of the cross country season.  I went to Hayden High School hoping to volunteer as a coach.  It was a match made in heaven.

Meseke was better known as one of the best high school basketball coaches in the state of Kansas. His best known player, Mark Turgeon, started at Kansas and now coaches at Maryland.  Ben just happened to also be one of the best cross country coaches in Kansas too.  I knew Hayden had enjoyed success in cross country but never realized that their great hoops coach had built both programs.

Ben was pleasantly surprised when I showed up in his math classroom.  He needed my help, confiding to me that he had just been diagnosed with a heart ailment that would prevent him from hitting the road with his runners.  I was the perfect substitute.  He was also a disciple of the legendary running coach Arthur Lydiard which was a major plus in my book.

I got to spend the next two falls watching Coach Meseke in action.  He had an uncanny talent for taking a small group of boys and turn them into world beaters.  He endlessly recruited kids to the program hoping to get 20 or so out for the team, knowing he needed some depth because of the mileage he would pour onto these young men right from the start would undoubtedly leave a few hobbled.  Mileage and pace work made up the first two-thirds of the season with speed getting added into the mix over the last third.

He kept a treasure trove of statistics, something that was a holdover from his time as a basketball coach, which allowed him to carefully measure each boy's progress, or the team's, against previous meets or seasons.  This love of numbers allowed Coach Meseke to immediately grasp the strengths and weaknesses of his teams.  He was a big believer of having his squads run off the pace and pouring it on over the last mile.  Meseke even had a designated pacer who worked to keep the Hayden pack together.

After 30 years at Hayden which included six state championships in basketball and six more in cross country, Meseke went looking for a bigger challenge signing on as head basketball coach at Shawnee Mission Northwest.  Cross country was out of the question as Northwest is led by the most successful coach in Kansas history, Van Rose.  Northwest's basketball fortunes improved considerably under Meseke's guidance although he never claimed a title for the Cougars.

A year ago his heart conditioned forced a transplant and a year away from hoops.  Coach Meseke made it back for the 2010-2011 campaign but that would be it for Ben.  He announced this summer his retirement from coaching.

Ben Meseke filled in the missing pieces about running that I hadn't learned from Tom Dowling and Fred Moore.  He showed me that you didn't need a pack of kids running all summer to be a successful coach.  Most of all he showed me how much fun you can have in training, whether it was his crow flight runs or the bike runs, workouts with Coach Meseke always offered something different, something to keep this old runner interested in what's coming next.
Posted by Rink's Ramblings at 6:35 PM