My life long love affair with sports really cemented itself in 1968. I had started to follow baseball in 1965 because of Sandy Koufax and the World Series. Koufax's refusal to pitch during Yom Kippur got my attention. He retired the following year so the 1967 St. Louis Cardinals next caught my fancy. What a great team full of bigger than life personalities.

I had started following Kansas basketball in 1965. I had watched my first KU game on TV when the Jayhawks pummeled Nebraska at home. I watched the heart breaking triple overtime loss to Texas Western and was hooked. I saw my first game in person at Allen Field House in the winter of 1968. I watched Jo Jo White lead the Jayhawks to an easy win over Iowa State. I remember Phog Allen being introduced at the game. I strained from my nose bleed seats to catch a glimpse of the great man but couldn't figure where he was sitting because the crowd was giving him a standing ovation . 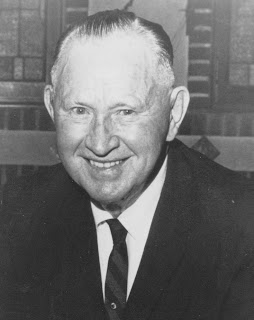 Later that spring I discovered to my delight that Forrest C. "Phog" Allen actually lived across the street from my grandmother. I don't know why this didn't come to my attention earlier but it was then I began to make pilgrimmages across the street and sit on the front porch with Dr. Allen and listen to his tales of basketball and life in general. His greatest regret was never getting to coach Wilt Chamberlain. He was bitter about this and the fact that he was forced into retirement, thus denying him a chance to coach his best known recruit. He also argued that James Naismith really wasn't KU's first basketball coach. Coach Allen told me that the teams that Naismith coached at KU were "intramural" squads and they weren't sanctioned varsity teams. Allen considered himself the "first" varsity coach at Kansas. The chats with this wonderful man were usually 15 minutes to half an hour. He was in frail health and by the following summer he wasn't taking visitors. It broke my heart not to be able to talk with him.

1968 was great year for sports at KU. The football team went to the Orange Bowl. I remember traveling from Abilene to one home game that year and watching John Riggins run all over the Colorado Buffaloes. It was the same year that I discovered Jim Ryun. His loss at the Mexico City Olympic Games broke my heart. Ryun's athletic feats inspired me to become a runner. But that's another story.
Posted by Rink's Ramblings at 8:40 AM