I'm a little late to my own anniversary.  Technically, I purchased a run specialty shop on September 1, 2014.  I didn't start working there full time until the third week of September.  So somewhere in the midst of this small business madness I'm celebrating one year as owner of Run Florida On McGregor. 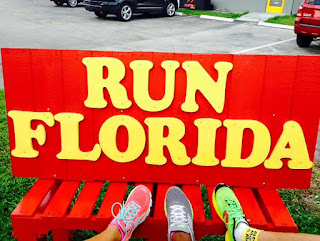 While it may have been a long, strange trip for the Grateful Dead, for me it's been a short, educational one.  I had wanted to get into the run shop business for the better part of the last 20 years.  Mike and Candy Pemberton decided I was the one they could trust to not mess it up.  They had created a homey, old school, slice of running nirvana that they really didn't want to see turned inside out.  Outside of a picture of me running the St. George Marathon in 1990 behind the counter and a poster of this year's Prefontaine Classic overlooking the showroom, little has changed.

Oh sure, we carry a few more shoes, maybe too many more shoes, but I hate it when a customer comes in and we don't have the size they're looking for.  And that's probably the biggest lesson I've learned, inventory control.  The shoe companies don't make it easy.  They create too many shoes in too  many awful colors, a few of which are way over-priced and they obviously have a pack mentality.

The minimalist movement reared its ugly head about a half dozen when Born to Run hit book shelves.  Now thanks in large part to Hoka One One, the pendulum has swung 180 degrees.  Maximal cushioning with a minimal heel drop is the hot new trend.  And then there are the tried and true shoes that fall in between, but that's really not what this blog is all about.

It's about people.  95 percent of the people that walk into my store are incredible.  They are looking for guidance and direction and we bust our hump trying to find the perfect shoe from them.  There are the four percent that come in and try out shoes, never to return because you know they're going online to order them and save all of five dollars.  I'm okay with that because at least they know we exist and a time will come when they're in a pinch and they'll come back.

And then there's the one percent, unhappy, confused and just awful people in general.  They hate all the colorful styles.  You show them every conceivable style and color in every catalog and they're outraged that the shoe companies don't make old-fashioned black or white shoes.  They order shoes and never come in to pick them up.  Or they come six months later after you've called them three times and become angry when you've sold them after waiting for three months.  Then they have the nerve to ask you to order more shoes for them.  I asked them if I have a sign hanging around my neck that says I'm stupid.  Needless to say they aren't my customer anymore.

Yet it's really about the new runner who walks into the door looking to enter a world that you've lived for the last 40 years.  They want to run.  Maybe they want to lose a few pounds, challenge themselves with a 5K or a half marathon.  What they find, rather quickly, is a huge community that is ready to open their arms up to them.  Southwest Florida has some many running groups that support every type of runner imaginable that it's easy to find a place that fits for you.

So here's to another year of Run Florida On McGregor, where we celebrate good shoes, a good run and the good men and women, who grace our store, all in search of the best run experience possible.
Posted by Rink's Ramblings at 8:52 PM